The NBA’s annual free agency period is in its final stages. We’ve seen a handful of massive trades and signings go down in recent weeks, and as a result, several squads have undergone significant overhauls.

Now that the dust has settled and many of the top players available have made their decisions on where to play this year, it’s time to take a look around the NBA and evaluate which teams did the most — or the least — heading into the new season.

All NBA gameday odds are current as of Monday, July 18, at 12 p.m. ET and courtesy of Caesars Sportsbook.

The Celtics were a pleasant surprise in 2022, using a strong second half of the season to reach the NBA Finals for the first time since 2008. Boston has since gone all-in on the opportunity to return to the grand stage and arguably improved the most of any other title contender in the league.

Basketball Betting Play of the Day

Basketball bettors: Sign up today at BetMGM Sportsbook and place your 2023 NBA futures bets. Click the link below to receive BetMGM’s welcome offer.

The Celtics made two big splashes in the form of Malcolm Brogdon and Danilo Gallinari; a pair of intelligent veterans who greatly improves the team’s depth and dramatically raises its ceiling. The franchise also gave up very little to acquire each player, which only helps its cause heading into next season.

Ultimately, the rich get richer. Boston now looks like an even larger threat to represent the Eastern Conference in the NBA Finals next season.

Philadelphia’s offseason wasn’t as splashy as Boston’s, but James Harden‘s decision to take a pay cut speaks volumes about his faith in the team’s culture and decision-making.

By giving the franchise the power to spend more money on other free agents, the 76ers were able to bring in P.J. Tucker and Danuel House, two veterans who should help this team improve on the margins. They’ve also each spent time playing with Harden in the past, so the adjustment period should be brief.

By re-signing Harden and improving their depth, the 76ers look poised to take another shot at the title in 2023.

2022 was a gap year for the Clippers, who were without Kawhi Leonard for the entire season and Paul George for a vast majority of it. Now that they’re back at full strength, LA isn’t wasting what could be its only opportunity and is further building around its two stars.

The big splash was signing John Wall, who is admittedly a major question mark. He hasn’t played more than 41 games in a season since 2017, and he’s completely missed two of the last three seasons. However, when healthy, there’s no denying that Wall remains an elite passer and solid finisher at the rim.

The Clippers also re-signed key contributors in Nicolas Batum, Ivica Zubac, and Robert Covington, giving them reliable wing depth while retaining one of the game’s more underrated centers. Losing Isaiah Hartenstein is tough, but this team is well-equipped to go all the way in 2023.

Don’t sleep on the Nuggets, who should finally be back at full health in 2023. They kicked off free agency by signing reigning MVP Nikola Jokic to a massive contract extension and followed that up by landing former Nets wing Bruce Brown, who was arguably Brooklyn’s third-best player behind Kevin Durant and Kyrie Irving.

What’s more, Denver also landed Kentavious Caldwell-Pope and Ish Smith via trade with the Washington Wizards, providing the team with some much-needed wing depth and a steady backup playmaker.

The only real head-scratcher was signing DeAndre Jordan to be their backup big, but assuming he doesn’t spend too much time on the floor, he should work out fine with Denver. 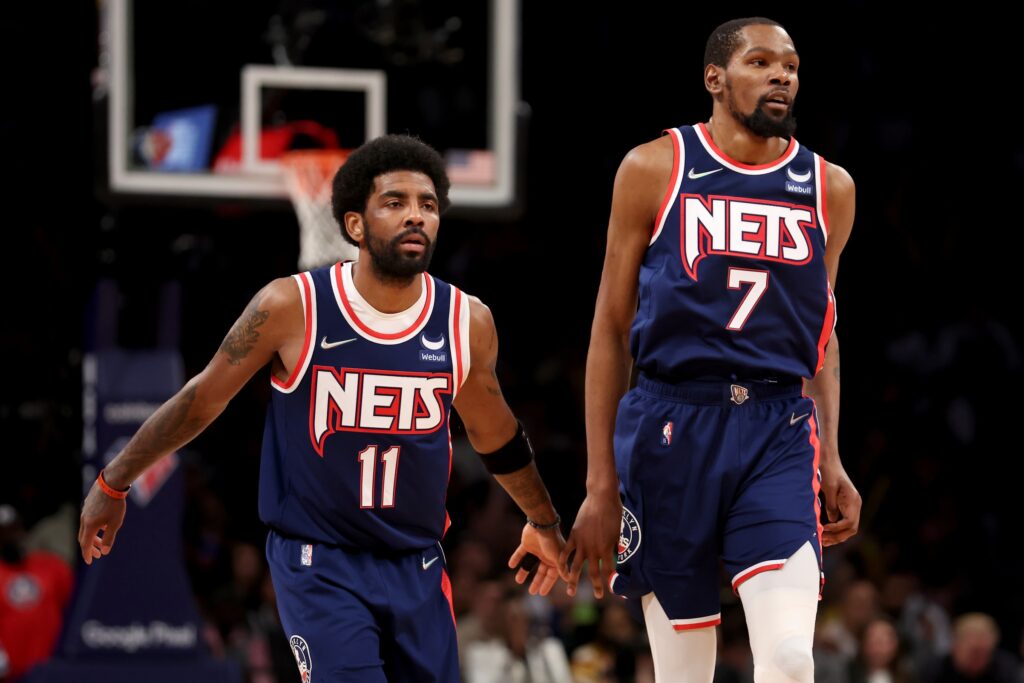 Where will Kyrie Irving and Kevin Durant end up? There’s no telling where either will play this coming season. (Image: USA TODAY Sports)

Simply put, the Nets are going through it. There’s a very real possibility that they begin the season without Kevin Durant and Kyrie Irving, potentially leaving the fate of the franchise in the hands of Ben Simmons, Seth Curry, and T.J. Warren. That’s hardly a winning recipe.

There’s also a chance that Durant and Irving both return next season, but that seems unlikely at this point. Durant has made it known that he wants out, and rumors are circling about Irving’s desire to play for the Los Angeles Lakers.

In any case, I would hold all bets on the Nets right now. There’s simply too much uncertainty surrounding this team to say how they’ll look next season and what they’ll be competing for, whether it’s the NBA title or the league’s worst record.

The Mavericks were one of the more surprising playoff teams this past season. They reached the Western Conference Finals and knocked off the Phoenix Suns along the way, who were heavy favorites to return to the NBA Finals.

One big reason why Dallas was able to achieve so much was the presence of guard Jalen Brunson, who left the team in favor of the New York Knicks — before Dallas even had the chance to pitch him on re-signing.

Dallas did sign JaVale McGee and traded for Christian Wood, improving the team’s frontcourt talent in the process. But Brunson is a big loss, and the way he left doesn’t exactly paint the Mavericks front office in the best light.

The Warriors will still be in the mix of title favorites next season, but their depth has undoubtedly taken a hit heading into next season. Key playoff contributors Gary Payton II and Otto Porter Jr. both signed elsewhere this offseason, leaving Golden State with some sizable holes.

Golden State did acquire Donte DiVincenzo — a move I’m rather fond of — but at this point, it’s hard to say whether he’ll offset the losses.

The Warriors are still in great shape, and they’ll be right back in championship contention this season. It was also never going to be possible for them to retain all their pieces. But this one has to sting for fans and bettors alike.

Initially, it looked like the Pacers were doing well to build toward their new future. Trading Brogdon freed up plenty of cap space, and re-signing young big man Jalen Smith was a smart move.

Then, Indiana swung for the fences by giving DeAndre Ayton the largest offer sheet in NBA history, which he signed shortly thereafter. That high didn’t last long, though, as the Suns elected to match Indiana’s offer and retain him.

There’s still a lot to like about this young Pacers squad, but this franchise has to be frustrated with the way the Ayton situation panned out. It’s nice to see that they were willing to spend to land a big player, but now the team is stuck in a position that it clearly did not want to be in.