This year’s NBA Christmas Day slate is tailor-made for parlay betting. With five terrific games on the schedule – none of which will overlap with each other — it will be an exciting challenge to see how far into the night your bet can stay alive.

To help you prepare for the event, I’ve put together three of my favorite bets: One standard, one longshot, and one same-game parlay.

All NBA odds are current as of Tuesday, Dec. 20, at 1 p.m. ET, and are courtesy of DraftKings Sportsbook. 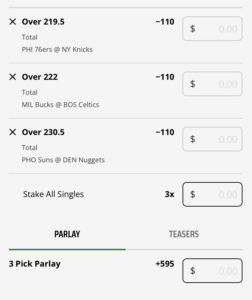 For my NBA pick of the day among parlays, I’m eyeing over/under bets in three different matchups. This three-leg bet comes in at (+595) odds, which means a $10 wager would pay over $69.

First, I like the Over at 219.5 points between the 76ers and Knicks. Philadelphia rosters two of the most dominant offensive players in the NBA in Joel Embiid and James Harden, while New York has three players averaging at least 19.4 points per game.

Up next, I’m taking the Over at 222 points between the Bucks and Celtics. Boston has the top-ranked offense in the league, while Milwaukee rosters perhaps the best player in the world in Giannis Antetokounmpo.

Finally, I’m adding the Over at 230.5 points between the Suns and Nuggets. Denver ranks third in offense and 28th in defense this season, and each team features plenty of superstar talent with Devin Booker and Nikola Jokić on the floor. 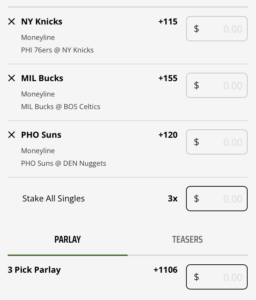 For my longshot NBA Christmas build, I’ve selected three underdogs to win their respective matchups. Each game has a relatively small spread, so they all have a good chance to be close.

At the top, I have the Knicks defeating the 76ers. New York’s seven-game winning streak is the best in the NBA right now, and having home-court advantage in this meeting is extremely important.

Next, I believe the Bucks could upset the Celtics. Boston has shockingly lost four of its last five — including two to the Magic — and could easily be defeated by a hot Milwaukee squad.

For the third leg, I have the Suns taking down the Nuggets in Denver. Phoenix is terrific on both ends of the floor, and after losing five games in a row, this team appears to have righted the ship. 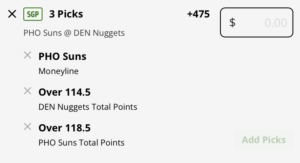 For my NBA Christmas same-game parlay, I’ve put together a three-leg bet at (+475) odds for the Suns vs Nuggets nightcap.

First, I have the Suns defeating the Nuggets. Phoenix should be able to take advantage of Denver’s lackluster defense, while the Nuggets could struggle to get things going along the perimeter.

After that, I’m adding Denver to score Over 114.5 points. This should be a high-scoring contest regardless of the result, and the Nuggets’ implied total in this game is well above this mark.

Finally, I like the Suns to score over 118.5 points. This is several notches above their implied total for the game, but I fully expect them to have a field day against this porous Denver defensive unit.