It’s time for Week 8 of the NFL season, putting us almost at the halfway point of the year. We have a good sense of the contenders and pretenders, along with which teams are trending upward and which are fading away.

This can guide us as we look at a team’s recent performances and target potential mismatches in head-to-head matchups as we build these parlays.

In this article, we’ll provide a best bet along with a longshot and Same Game Parlay for Week 8.

We’ll look to keep it rolling after a strong showing with our Week 8 NFL parlays below.

NFL Week 8 odds used in these parlays are current as of Wednesday, Oct. 26, at FanDuel Sportsbook. 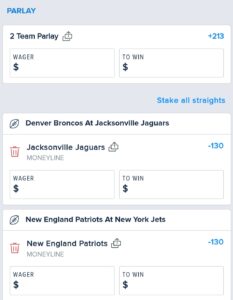 The Jaguars (2-5) have fallen on tough times after a promising start, riding on a four-game losing streak. They head to London to take on one of the most disappointing teams in the league in the Broncos (2-5). Both of these teams desperately need a win to stay alive in the playoff race.

The good news for Jacksonville is that they’ve ranked pretty well in DVOA on both sides of the ball, per Football Outsiders. The Jaguars have the ninth-best DVOA in the NFL, while the Broncos come in at 22nd.

Broncos’ quarterback Russell Wilson is returning for this game, but he’s been so ineffective that it’s hard to think that’ll make much of a difference. Look for Jacksonville to lean on running back Travis Etienne Jr. as he assumes the full workload in this backfield. The rookie has looked absolutely explosive this season.

The Patriots (3-4) are coming off a disappointing loss to the Bears (3-4) on Monday Night Football, surprisingly allowing a struggling offense to eclipse 30 points. New England’s defense (fifth in Pass DVOA) is much better than they showed in that game.

We can project a much better effort against the overachieving Jets (5-2). This is a team that has had struggles in pass protection, ranking 18th in Adjusted Sack Rate. They also just lost one of their best offensive linemen to a season-ending injury in Alijah Vera-Tucker.

Add in the fact that Breece Hall is also done for the year and you now have a run-heavy team that just lost two integral pieces of their offenses. They acquired James Robinson to help alleviate this loss, but it’ll take time for him to gel, so ride with the Patriots in this best NFL betting pick. 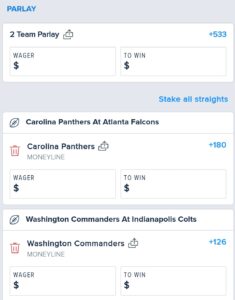 The Panthers (2-5) shocked the NFL world by dominating the Buccaneers (3-4) in a 21-3 win. The defense was terrific, limiting Tom Brady to only 5.9 yards per attempt while holding Leonard Fournette to 19 yards on the ground. Now, they take on a highly limited Falcons passing attack.

Atlanta passes the ball at the lowest rate in the NFL, despite having two young studs in Kyle Pitts and Drake London. This is a team that clearly does not trust Marcus Mariota at quarterback, as he only attempted 13 passes despite trailing all game against the Bengals last week.

Carolina’s offense hasn’t been good, but we saw some signs of life last week. P.J. Walker played efficient football, completing 16 of 22 passes for 177 yards and two touchdowns. D’Onta Foreman was terrific, rushing for 118 yards on 15 carries.

I love the value on Carolina here.

The Commanders (3-4) have now won two games in a row, backed by a defense that is seemingly improving every week. They were able to hold Aaron Rodgers to only 5.5 yards per attempt in their upset victory last week. Now, Washington gets to take on Sam Ehlinger in his first start.

While Ehlinger will add much more mobility to this offense, this is a team that has struggled in pass protection, tied for 24th in Adjusted Sack Rate. That’s bad news against a Washington defense stacked up front with Montez Sweat, Jonathan Allen, and Daron Payne.

Taylor Heinicke can be erratic at times, but he’s one of the few backup quarterbacks who isn’t so much of a downgrade from his starter. We’ll back Heinicke due to his experience, as we don’t really know what we’re going to see from Ehlinger. Washington has the quarterback advantage here. 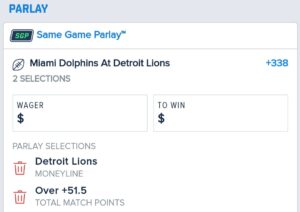 The Lions (1-5) have fallen on hard times of late, losing four straight. Their offense has hit a wall, failing to get anything going against two good defenses in the Cowboys and Patriots in their last two games. However, there’s a good chance that they’ll be getting D’Andre Swift back this week.

Swift adds an explosive element that was missing from this offense in recent games. Add in the fact that Amon-Ra St. Brown will be back as well and it’s all hands on deck for Detroit. This is still a team with a strong offensive line and Jared Goff is capable of playing well when at home in an indoor environment.

The Dolphins have struggled to defend the pass, ranking 25th in Pass DVOA. Look for Detroit’s offense to finally get back on track this week, pulling off an upset against a Miami team that almost gave it away against the Steelers last week. This game has the makings of a shootout, as Detroit ranks 31st in Pass DVOA and 29th in Rush DVOA.