After four weeks in the NFL season, we’re getting a good sense of the hierarchy of contenders and pretenders this year.

This will guide us as we put together some winning football parlays.

In this article, we’ll provide a best bet along with a longshot and Same Game Parlay for Week 5.

We’ll look to rebound from a poor performance with our Week 5 NFL parlays.

NFL Week 5 odds used in these parlays are current as of Thursday, Oct. 5. 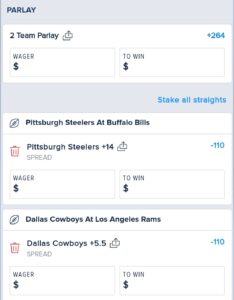 The Steelers have a tough game on the road against the Bills, but they get an upgrade at quarterback with rookie Kenny Pickett taking over as the starter for Mitchell Trubisky. Pickett is more willing to take shots downfield and could provide a spark for this offense.

While Buffalo is one of the elite teams in the league, they’ve shown a propensity to play down to their competition at times. They lost to these Steelers as 7-point favorites in Week 1 last season, and they also had a shocking 9-6 defeat at the hands of the lowly Jaguars last year.

This is a high bar to clear for the Bills at 14 points. They could be leading by 20 late in the game, only for Pickett to lead a meaningless touchdown drive in garbage time to complete the backdoor cover.

Head coach Mike Tomlin always has his team playing hard, so we’ll roll with the Steelers.

The Cowboys have impressively gone 3-1 with Cooper Rush replacing an injured Dak Prescott. While Dak remains out for this game, the team has been thriving because of an elite defense. They come in as 5.5-point road underdogs against the struggling Rams.

The Cowboys’ pass rush has been fantastic, posting a league-best 10.3% Adjusted Sack Rate, per Football Outsiders. That’s bad news for a Los Angeles team that has struggled in pass protection. The Rams’ offensive line has a 9.4% Adjusted Sack Rate, which is 29th in the NFL.

Matthew Stafford has been inefficient because of this, posting 6.8 yards per attempt, which is much lower than last year’s 8.1 average. We’ve seen a lot of check-downs to Cooper Kupp and Tyler Higbee this season. Expect that to continue here. 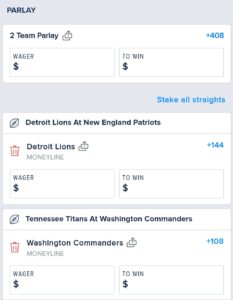 The Lions are the better team here, but they’re road underdogs to the Patriots, despite New England likely playing another game without Mac Jones. While it remains unclear if Amon-Ra St. Brown, D’Andre Swift, and D.J. Chark will return, Detroit is still well-equipped on offense.

That’s because of how dominant their offensive line has been this year. According to Football Outsiders, the Lions rank fourth in Adjusted Line Yards and second in Adjusted Sack Rate. This means that they’ve been terrific in both run-blocking and pass protection.

While the Patriots’ defense is definitely tougher than the Seahawks, we can project Jared Goff to continue to be able to move the ball efficiently. Even if Jamaal Williams is starting again, he should run well against a New England defense that ranks 31st in Rush DVOA.

The Commanders have dropped three in a row after an opening-week victory over the Jaguars. They come in as short home underdogs against a Titans team that is currently on a two-game winning streak, with huge victories over the Colts and Raiders during this stretch.

Washington’s losses stem from offensive struggles due to leaky pass protection. This was exacerbated by the matchup against two of the most imposing pass-rushes in the Eagles and Cowboys. This week, they take on Tennessee, who ranks 16th in Adjusted Sack Rate.

Look for a better showing from Carson Wentz this time around. We’ll ride with the Commanders to pull off the upset at home in a bounce-back spot after three consecutive disappointing performances. 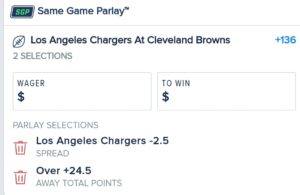 The Chargers got back on track in a 34-24 road win over the Texans. Justin Herbert looked fully healthy, completing 27 of 39 passes for 349 yards and two touchdowns. They also got Austin Ekeler going, as he combined for 109 total yards and three touchdowns.

Los Angeles now takes on a Browns defense that ranks 26th in EPA per play, according to RBSDM.com. This means that opposing offenses have been able to move the ball efficiently against them. That’s bad news going up against Herbert and company.

Look for the Chargers to win by a touchdown or more while scoring at least 25 points in this one.