We’re on to Week 10 of the NFL season, so it’s time for the stretch run. There have been several surprising teams, like the Seahawks and Giants, along with disappointments, such as the Rams and Buccaneers.

We’re slumping right now, but that means we’re ripe for a bounce back. To achieve this goal, we’ll focus on a team’s recent performance along with pertinent data and head-to-head matchups as we try to target mismatches.

Let’s have a strong showing with our Week 10 NFL parlays below.

NFL Week 10 odds used in these parlays are current as of Wednesday, Nov. 9, at FanDuel Sportsbook.

I absolutely love the Steelers this week. Not only are they home underdogs coming off their bye week, but they’re also likely to get back their best player in T.J. Watt. The star edge rusher has been out since Week 1 with a torn pectoral injury. Let’s remember that in the one game he played, the Steelers put forth a dominant defensive effort in an upset victory over the rival Bengals.

When you look at the Saints offense, you see a team trending in the wrong direction. Quarterback Andy Dalton was abysmal in their loss to the Ravens on Monday Night Football.

The veteran was sacked four times and threw one interception. Most of his 210 passing yards were accumulated in garbage time with the game already out of hand.

Steelers head coach Mike Tomlin tends to have his team prepared following the bye week, as the team has an 11-4 record throughout his tenure after the one-week layoff. Look for Pittsburgh to get a much-needed win here.

We head to Chicago to take the Bears in our next selection. This is an NFC North division matchup that favors the home team. That’s because the Bears have taken off on offense, scoring a combined 94 points in their last three games. They’ve called more designed runs for Justin Fields, and it’s yielding terrific results.

Simply put, the Lions have one of the worst defenses in the NFL. According to Football Outsiders, they rank 26th in both pass and rush DVOA. We could see Fields find Darnell Mooney downfield against this vulnerable secondary. We may also see David Montgomery and Khalil Herbert run wild.

While the Bears have struggled on defense the last two weeks, especially after trading Roquan Smith and Robert Quinn, I think that their offense is playing too well to lose this one. Ride with Chicago in this best NFL betting pick. 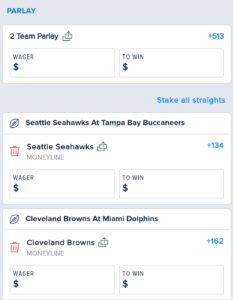 The Seahawks travel overseas to Germany to take on a Bucs team that continues to struggle on offense. Tampa Bay needed Tom Brady to orchestrate a last-minute, game-winning drive to knock off the Rams last week. When we look at the line here, we see that Seattle continues to be disrespected, even though they’ve been one of the best teams in football.

This is a team that ranks fifth in overall DVOA, seventh on offense, and 12th on defense. They are on a four-game winning streak, holding opponents to a combined 56 points during that span.

Meanwhile, the Bucs have only 80 points in their last five games. This is a lethargic offense devoid of explosive plays, as Brady is averaging only 6.4 yards per attempt.

Look for the Seahawks to extend their winning streak on a neutral field in Munich.

To conclude the longshot parlay, we’ll take a road underdog coming off their bye in the Browns.

This is a team that is making strides on defense, causing fits for Joe Burrow in a convincing 32-13 Week 8 win after limiting Lamar Jackson and the Ravens in a 23-20 loss. Cleveland has racked up eight sacks during that stretch, including 2.5 from star edge rusher Myles Garrett.

While the Dolphins’ passing game has been extremely impressive with Tua Tagovailoa playing at an MVP level, don’t sleep on the Browns here. This is a team that ranks 11th in overall DVOA, which is actually head of 12th-place Miami. We could see a close game in this one, making Cleveland live dogs at a good price.

The Browns are sleeping giants with Deshaun Watson returning soon. 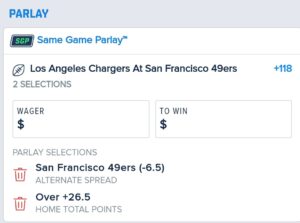 The 49ers look poised for a strong finish to the season. This team is littered with elite weapons throughout their offense, including Christian McCaffrey, Deebo Samuel, George Kittle, and Brandon Aiyuk. Add in the fact that head coach Kyle Shanahan is one of the best play callers in the NFL, and you have a scary team.

When you look at the Chargers, you see a banged-up team missing key players like Mike Williams and Rashawn Slater. They could also be without Keenan Allen for another game.

This has really hurt Justin Herbert, who is averaging a career-low 6.4 yards per attempt. The offense has been filled with check-downs to Austin Ekeler.

That explosive element is missing for the Chargers, which is bad news against San Francisco. I don’t see how they can keep pace with the Niners in this one. I’ll take the spread with San Francisco, as this looks like a double-digit win, one where they eclipse 30 points.